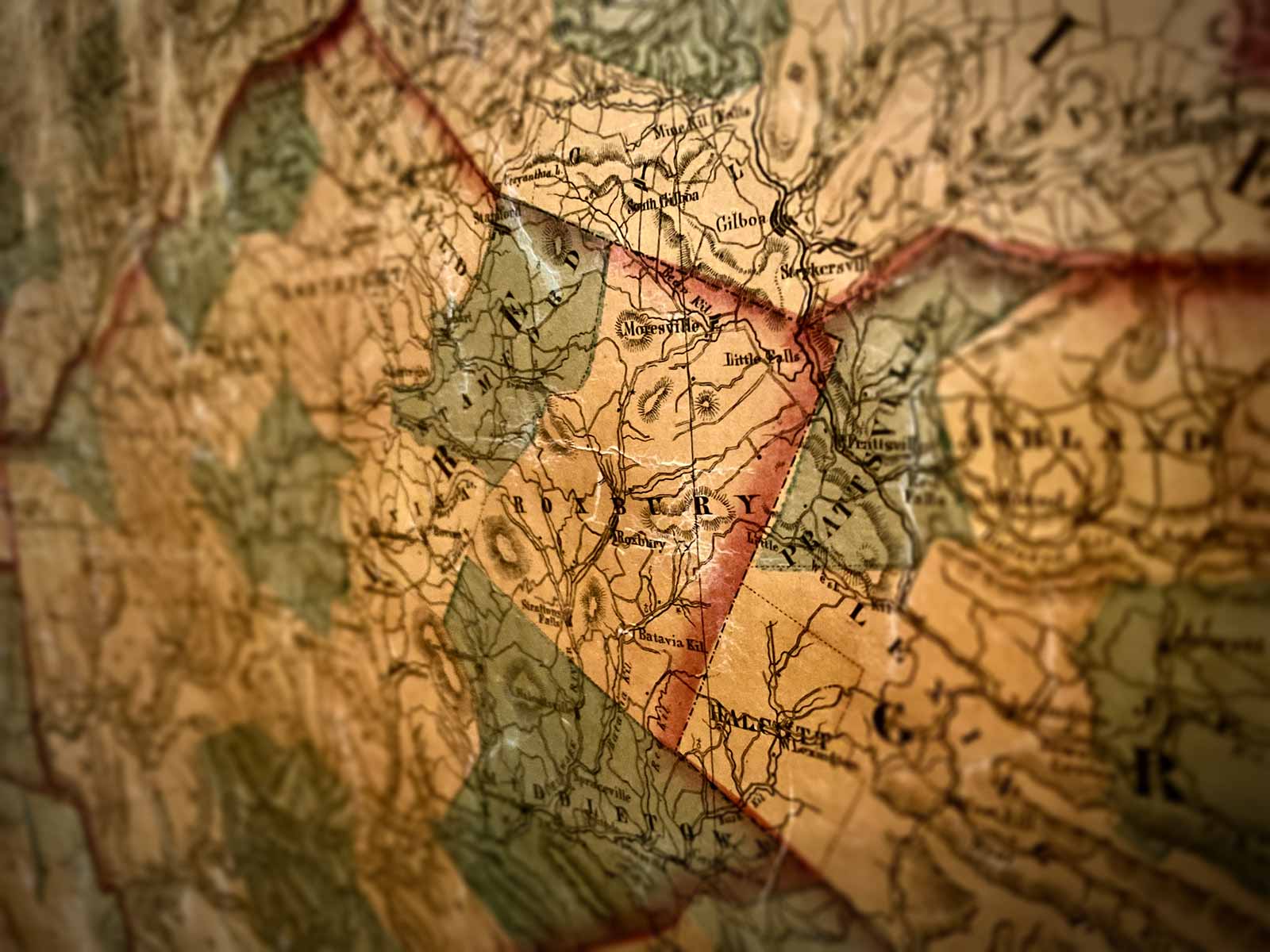 From the Mississippi boat captain who traveled to Roxbury to build a family summer house, to the current owners, an Oscar winning filmmaker and his husband, there’s plenty of history here… The estate is located at what was originally known as Stratton Falls Road, and up till today the place is marked by two distinct buildings: the Captain’s House and a tall bank barn, built against a 200-feet wide cliff. A smaller colonial house next door, surrounded by a white picket fence, predates these buildings on the corner with Scott Green Road. The smaller house was built in 1825 by a man named Patterson.

One of the sons of Patterson the builder was William Patterson, a wagon maker who served in the 144th Infantry Regiment of New York Volunteers during the Civil War.

After the war, Patterson served under the orders of Brigadier General Charles Suter, The two became close friends and lifelong associates. A steamboat career on the Mississippi river followed for both Charles Suter and William Patterson, whom from then on was known simply as ‘Captain Patterson’.

Captain Patterson ended up selling his family home on the corner of Stratton Falls Road and Scott Green Road to Charles. And now a rich man himself, the Captain bought the land next door, and built his family a much grander house there, the Captain’s House, in front of the three-story bank barn. The Captain’s House and barn sat on 44 acres of land, with panoramic views of the valley. The house is a Center Hall Colonial, and the Captain built in some southern style architectural details. One of those details is the Widows Walk, the wrought iron rooftop platform.

A popular romantic myth holds that platforms like these were used to observe vessels at sea. The wives of mariners would watch for their spouses’ return, often in vain as the ocean took the lives of the mariners, leaving the women as widows.

Obviously, this house isn’t anywhere near the sea. But it definitely makes it the Captain’s House. After Captain Patterson died in 1896, his widow Leonora spent the summers at the Captain’s House many years thereafter. She was a beloved figure amongst the villagers. Once in her seventies, Leonora returned to her native Baltimore for good, and sold the family home.

The Van Benschoten families introduced cauliflower as a profitable market crop in the locality in the late nineteenth century, and during Laura Van Benschoten’s years at the estate, the many acres of land were cultivated to grow cauliflowers as well. In 1930, George and Nell Hafner bought the estate. They lived in New York City where George was a dentist, and used The Captain’s House as their summer home. They remodeled and modernized the place, and also made some headlines:

From the CATSKILLS MOUNTAIN NEWS:
“Mr. Hafner, who bought the Patterson place some time ago, was in his barn trying to start his car, when he noticed smoke and flames shooting from under the car. A call was at once sent in and the engine arrived in a few minutes. By that time, the car had been backed from the barn, and the fire extinguished. The hood of the car was somewhat damaged.” In the early 1940’s the barn, which had originally been built as a carriage barn, was converted into a chicken coop. Twenty-five windows were installed on the south-east side of the barn, as chickens need daylight.

However, the chicken business didn’t last very long, as gas rationing during World War II made the transportation costs of the eggs from Roxbury to New York City way too expensive.

The chickens left, but the twenty-five windows that gave the barn its new, distinct look, stayed. The Hafner’s owned the estate for a quarter of a century and when both passed away in the 1950’s, their daughter Winifred inherited the place.

Winifred was a debutante who had her education at the Starrett School for Girls in Chicago and at Columbia University. In 1934 she married Earl Schreiber, and they had a daughter and a son, Saranelle and Skip. Earl would serve in the US Navy with distinction during World War II.

Like Captain Patterson, Earl Schreiber was captain of a ship: he served on the USS Cassin Young during World War II, in the South Pacific. A week before leaving the Cassin Young he directed the rescue of 125 sailors from the doomed carrier, the USS Princeton, in late October 1944. The Schreiber family lived in Japan for some years after the war, and Earl was promoted to Rear Admiral, He taught at the Navy’s post-grad school in Monterey, CA, and worked at the Pentagon, and in 1959, when Admiral Schreiber retired, they moved to the vacant house in Roxbury.

Winifred became a community leader in the village of her teenage summers, and was involved with the library and hobby club. Admiral Schreiber taught at the Roxbury Central School.

Winifred died in 1983, and Earl Schreiber kept to himself in later years, allowing only a few people on the estate, and storing large amounts of goods in the barn, which ended up packed to the roof. Admiral Schreiber, a Bronze Star recipient, passed away in 1996, 89 years old, and was buried with full military honors. During the summer of 1999, three years after Admiral Schreiber passed away, the movie You Can Count on Me was shot at the estate. The main characters, played by Laura Linney and Mark Ruffalo, lived at The Captain’s House.

The film was nominated for two Oscars at the 2001 Academy Awards: Best Actress for Laura Linney and Best Original Screenplay. When Laura Linney walked the red carpet at the Kodak Theatre, Joan Rivers asked her about the shoot in the Catskills. Linney entrusted her that her dressing room was, in fact, a barn… Right after the film crew for You Can Count on Me left, the estate was bought by Roger Ross Williams, himself a filmmaker, and the first African American director to ever win an Academy Award. Williams has directed a number of acclaimed films including Life, Animated, which won the Sundance Film Festival Directing Award; ​God Loves Uganda​, and ​The Apollo​, a documentary about Harlem’s legendary Apollo Theater.

Speaking of awards: his husband, Casper de Boer, once made his film debut as an actor in a film which won both the Academy Award and Golden Globe for Best Foreign Language Film. A native of the Netherlands, he’s worked in film for decades, before he became infatuated with the celebrations held at the estate.

Both cherish every day at their place, having spent years building and fine-tuning it. And having welcomed guests for over a decade now, the estate has established itself as the ‘gold standard’ for Catskills merriments.

Our Carriage Barn is what is called a bank barn, getting its name from a simple but clever construction technique: the barn is built into the side of a cliff, thus permitting two levels to be entered from the ground.

The lower level of bank barns often housed animals, the upper levels served as threshing floor and storage. The hillside entrance gave easy access to wagons – and that is what the Roxbury Barn was built for originally – to serve as a horse carriage barn.

Nowadays, the front side entry level and upper level are the two inside reception spaces, while the backside ground floor serves as the large prep area for our caterer.